When declaring variables, you can indicate which type of variable this concerns. If this is not indicated or if no declaration is made, the variable is automatically assigned the type Variant. The following table lists the available variable types and their characteristics:

Variables are usually declared with the Dim statement. For example: "Dim sLocation as String". sLocation is the name of the variable and String is the type of variable. Variable declarations are usually placed at the beginning of a procedure / function, but this is not mandatory. Below is an example of a declaration of variables:

Variable s is declared as a string and i and j as integers. No data type has been defined for variable k and therefore automatically becomes a variant. So 'Dim h' and 'Dim h as Variant' are in fact the same. It is possible to define several variables at the same time on 1 line, as in the second line: 'Dim i As Integer, j As Integer'. In the last line of this example, the variables m, n, and o are declared on one line. But because only o is followed by Byte, only o is a Byte. Variables m and n do not have a data type and are therefore of the Variant type.

When making a declaration, you can choose from the data types as listed in the table in the previous section. Only the data type Decimal is an outsider. This data type cannot be declared directly via a Dim statement. In order to declare a variable as Decimal, it must first be declared as Variant. After that this declaration must be converted to Decimal with CDec. So:

In the table from the previous section, some variables also have a short form for the declaration type. This dates back to the BASIC era and is hardly used anymore, but it still works. This short type declaration must be pasted directly after the name of the variable. For example variable 'var' can then be declared as an integer as follows: Dim var%

The name given to a variable can be determined at your own discretion, but this name must meet a number of requirements: 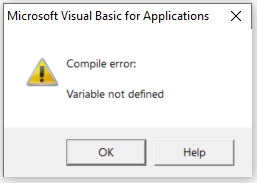 Variables can also be declared at the module level. This means that all procedures in this module can use this variable. This can be done by declaring these variables with Dim or Private at the very top of the module, directly below any Option Explicit or other Options. These variables are thus declared before the start of the first procedure. Although Dim can also be used in this case, it is better to choose Private. In this way the declaration immediately shows to which level it applies.

Variables can also be valid for the whole project (so all procedures and all modules). Then the variable must be declared with the statement Public. This statement must also be placed at the very top of a module. Sometimes Global is used instead of Public. Global can only be used in normal modules, while Public can be used in all modules (including class modules, forms, worksheets). Global is still available for compatibility reasons and has actually been completely replaced by Public. Although Public variables can therefore be used in all modules, a declaration in a standard module is preferred. The working method in other modules is slightly different. Suppose in the class module of sheet1 the variable bTest is declared as Public (Public bTest as Boolean). To use this variable on another worksheet, the following syntax must be used:

It is allowed, but not recommended, to give variables at different levels the same name. In a procedure, a variable with a name can be declared, which also already exists as a Public variable. In such cases, the variable takes precedence at the lowest level.

Here are some guidelines that can be used when declaring variables:

As mentioned, declaration of variables is not mandatory, but this has a number of advantages:

There are also a few disadvantages of declaring variables, but in many cases these do not outweigh the advantages:

Hopefully this article has helped you understand all the ins and outs of declaring variables in VBA. If you have any questions about this topic or suggestions for improvement, please post a comment below.

You have declined cookies. This decision can be reversed.

You have allowed cookies to be placed on your computer. This decision can be reversed.